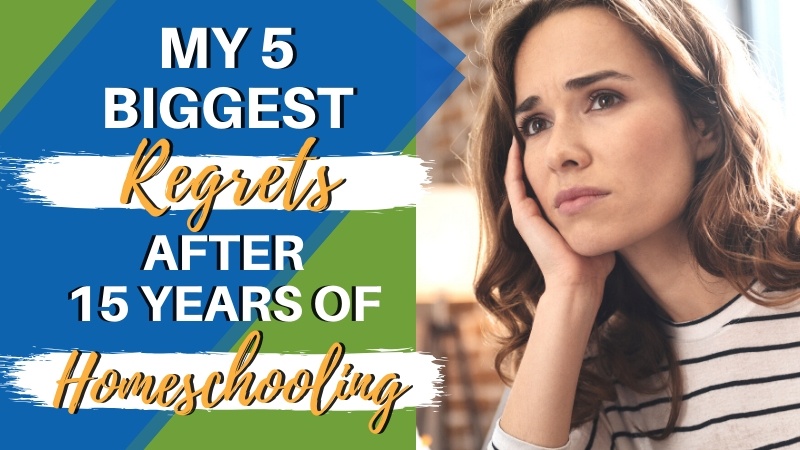 My 5 Biggest Regrets after 15 Years of Homeschooling

When you’ve been homeschooling as long as I have (15 years!), you start to become reflective.

Since I sent my oldest off to college this fall (she’s doing great, BTW!), I’ve been thinking a lot about my homeschool journey so far. (I still have three at home -- and at least 5 more years of homeschooling before they all should be off doing something!)

And I’ve found myself also rejoicing in our many successes! Certainly having my oldest go to college counts as one. 🙂

But I find that I do have a few regrets. These are things that I regret not learning sooner or wish I had done.

And now that my kids are older, some are things I can’t “undo.”

So today I’m sharing my 5 Biggest Homeschool Regrets over 15 years with you in the hopes that you can learn from me … and possibly not make the same homeschooling mistakes!

If you’re struggling with homeschooling or just getting started, hopefully you’ll find a few things to do right out of the gate to make things a little better.

Want to keep reading instead of watch? Scroll to read a transcript of the video.

Hello ToriAnn Perkey here and from my homeschool to your homeschool, today I want to talk about my five biggest regrets that I have since I've been homeschooling.

I've been homeschooling for 15 years. It is hard to believe it's been that long. I started when my oldest was just three years old and now she is launched off to college and oh I've been reviewing a lot about my homeschool experience. It gives, it gives you time to pause.

And I've been thinking, what are the things I regret? What would be the things that if I could look back at younger me and say "do this differently", I would do. And I thought of a lot of different things because I think that's pretty natural. It is natural to have things that you're really happy you did and regrets. And I narrowed it down to the top five because I didn't want to overwhelm you.

Do things a little bit differently

So today we're going to go through those. We're going to go through the things that I wish I could go back and say to younger me and invite her to just, you know, just do things a little bit differently. Overall, I'm really, really satisfied with how our homeschool has turned out for my oldest and how it's turning out for everyone else. Which is a good thing because I plan on doing it for quite awhile in the future. But here's a few things that I regret that I may be changing up just a little bit as we go forward.

Okay. Number one, you ready? So here we go. The first is, I for a long time thought more is better. I am a collector. I'm not a hoarder, but maybe with curriculum I am. Every time I saw a new book or a new curriculum or a new idea, I would pick it up and I would read it and I would devour it.

So my first regret is I didn't learn sooner, that simple really is better. It really is going simple, taking, breaking down what needs to happen into the tiniest, like most fundamental pieces and then slowly building until you hit just that right balance. Its a much better process for us.

Okay. Number two. The second regret I have is over trusting the experts. And I know that's funny to say because I know some of you watch these videos and you see me as an expert. And it still blows my mind that I sit in that space for some of you because I really do feel like I'm figuring it out as I go along, just like the rest of you.

And I just have some things to share. But I know that I was really good at trusting the experts. I would read certain homeschool philosophies and I think that's the way to do it. And I tried to follow all of the things they said. And in some cases it worked out really well, but in other cases it didn't. And I held onto certain ideas far longer than I should have because the expert told me to.

Instead, I wish, I wish, I wish I had trusted my gut. I wish that I looked at my kid in his eyes or her eyes and said, Nope, you need something different. And I backed away from the experts and I had created a homeschool that really was designed specifically for my children. And I tried to do that, but I was still listing far too much to the experts.

So my suggestion is please trust yourself if you don't see something working, it's okay to change even if the expert says what you're doing is absolutely wrong, because in the end you are the expert on your child.

Number three. The biggest regret I have is that I got too involved and I helped too much with the learning. It was really easy. They were home, they needed help. I was there, we were doing activities, we were engaged and when they were little that was awesome, but as they got older I was still engaged.

I was still doing the activities. I was still doing everything with them and because I knew more than they did, I was often helping too much and what I found looking back is that some of my children, more than others, ended up being less independent as learners.

I needed to transition them to owning their own learning and putting them, responsible for making that learning happen, whether it was in a curriculum or whether it was searching things on their own. I needed to do that sooner. They were capable of it far sooner than I expected.

It would have been messy. It would have been yucky. It would have looked like not learning probably longer than I would have been comfortable within the moment. But it would have paid dividends later on. And now we're playing catch up with some of my kids who needed those lessons a lot earlier. And it's always easier to teach a kid a lesson sooner rather than later. So that's my third regret that I just held on to the responsibility of the learning far too long.

Okay. Number four, I didn't keep a consistent journal. I had different ways of record keeping, as sometimes I would write in the lesson plans. Sometimes I actually had like a journal, I was tracking things. Sometimes we would write a report at the end of the week. I have all kinds of things. But I didn't keep something consistently and I wish I had. I wish that I had one place I could go back and just look at all of it.

15 years is a long time. I wish I could go back and look at what we were doing at any given time. And maybe that's a dream. Maybe that's not realistic and maybe, maybe I just need to let go of the expectation that that would be possible.

But I wish I'd found an easy way to do record keeping and to do it consistently. Because if I had, I think I would love to go back. I know I would love to go back and look at my kids when they were younger and see the things we were doing and learning. And I would be able to look at the whole picture and say, wow, we really did accomplish a lot. So that's my fourth regret is that we didn't keep a consistent journal.

#5 Regret = Too Much Homeschool Worry

Why was I so worried? But I keep, it is so hard to let that go. And I worry about some kids for some reasons. I worry about some of my kids for other reasons and I'm learning more and more that worry in large "doses" just doesn't serve you any great purpose. A little bit is good. And I've talked about that in the past, but any great worry, not really.

Seeking the peace that comes from "it will be okay", helps your homeschool move along better. And I have wasted over the course of my homeschool experience, a lot of hours of worry both in conversation and privately that could have been better served in other ways.

Oh wow. So those are my five biggest regrets. Maybe you can take something out of this, hopefully just a little bit, and it will help move the needle for you. And that way you will have fewer regrets as you go on your homeschool journey. Now if you are watching this anywhere else besides my blog, be sure to click on the link and head on over to the blog. I have lots of other videos that talk more about these different topics as well as lots of resources to help any homeschooler at any point in their journey feel more successful and more confident.

Because that is why I make these videos every week. I'm ToriAnn Perkey, so that I can help you be a successful and confident homeschool mom. I'll see you next week.