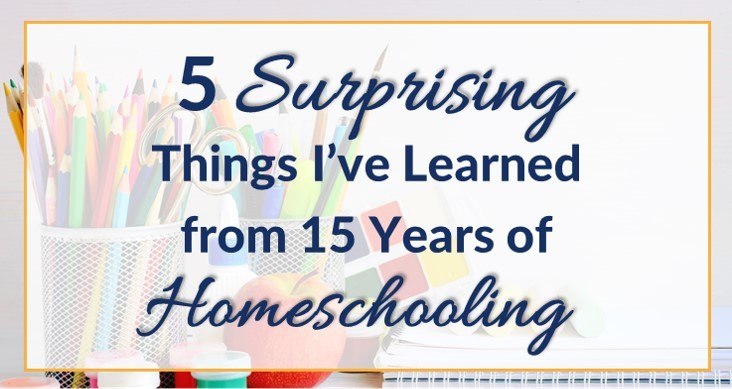 My oldest is off to college in just a few weeks. (Yikes/Sob!)

It seems like only yesterday I was just at the beginning … trying to decide if homeschool was right for my family … learning how to homeschool. Now I’m looking back and realizing I’ve learned A LOT over the last 15 years.

And what I realized REALLY surprised me.

What I thought I would learn isn’t necessarily what I have learned … but I’m so grateful for what I’ve picked up along the way.

And I hope what I’ve learned can help you too (even if you’re just starting out on your homeschool adventure!)

So this week I’m sharing the top 5 things I’ve learned from 15 years of homeschooling.

Want tons of FREE resources to
help your homeschool?

Instructions to access to the FREE Homeschool Help Center is flying to your inbox right now.

If you don't see it, please check your Google promotions or your spam folder.

Hello, this is ToriAnn Perkey, and from my homeschool to your homeschool, today,I want to talk about the five most surprising things I've learned over 15 years of homeschooling. That's right. I've been doing this for 15 years. My oldest is headed off to college. I've got a bunch of teenagers now and I've picked up a few things along the way. I knew I'd learn a lot, but there's some things I've been really surprised about, and that's what I want to share with you today.

So the first thing that just really surprised me is that my kids need me less and more than I thought they would. So my kids need me less because it is just phenomenal how much learning they actually do on their own. I know that over and over, people ask me, well, how do you teach high school this? Or how do you do this? And I say, well, we find the right resources, and they kind of just take care of it.

So a big part of this surprising learning, this surprising journey that I've been on is learning that they really do need me a lot less than I thought they would when I first started.

On the other hand, they need me a lot more. They need me to show up and be supportive emotionally in so many ways. And that's true of any teenager. They're also involved in so many different activities, and I'm volunteering and I'm helping and I'm teaching and I'm coordinating and I'm running the home.

They also need me to help create the vision and to help facilitate this educational journey. And it's time consuming to do that in a different kind of way. So rather than being at the table marking books with pencils or showing them how to do things, I've become more of a coordinator and a facilitator, which is a lot more than I thought it would. So that's the first thing that my kids need me more and less than I thought they would. First surprising thing.

The second thing that's really surprised me as my kids have gotten older is it's a lot harder to let go then I thought it would be. I assumed that because of my personality, I would be so excited to see them grow and progress and want them to move on and do exciting things and be involved in things.

But because they've been home and because I've been so involved with so many aspects of their educational experience for so long, as my teenagers and now my adult children are starting to really move beyond my sphere of influence, I find I'm having a little bit of trouble letting go -- the control part of me, the part that loved to be in all the pieces and know what was going on.

I really ... there's parts I really don't know much about anymore. And it's surprised me how much I miss being that involved. And not in a bad controlling type of way, but just a knowing and able to help and answer questions and help them see and coordinate. So it's been really interesting.

So the second thing I've learned ... that I've been surprised to learn is just that it's harder to let go of the role that I took on when they were little as they move out into the bigger world, which is of course what I want.

The third thing that I have been surprised to learn is that even with all of my efforts to try and do this, I still could have let them play more, and I could have worried less. I am watching my children become phenomenal adults, and as I watched the progression of that happen, even though ...

I mean it's not a smooth road, it's got bumps and hills and detours. I'm seeing them become these amazing people and realizing that the worry and the guilt and the frustration and the worry ... I could have let more of that go. There needs to be some of it because otherwise I wouldn't have done all the things I did, but the nights when I would lie in bed and think I'm ruining my children -- I'm realizing I could have done even less of that than I thought.

So number three surprising thing that I've learned is that I could have worried less and we could have played more.

All of the things that I cared about, I didn't realize how much I was going to love interacting with other women who cared about the same things. So the fifth-- the fourth most surprising thing about all of this, this homeschool journey, is that I found my best friends in the homeschool community.

The fifth thing, the fifth most surprising thing, I think that I've learned in this in this 15 years is that I didn't get bored. So little disclosure, I'm really good at starting projects and not finishing them. I'm really good at gung-ho, get going, super excited, but at some point I'm going to trickle out and lose attention span and move on to other things. And I have a wake of fairly large projects in my life that testify to that. I never have lost my love for homeschooling. I've never gotten bored.

So it was projects in chunks maybe, I don't know. But I've just been so surprised to recognize as I look back that I am not bored and I haven't lost interest. I'm still as excited and is engaged to get up and get started and do it as I was 15 years ago. And that is pretty dang mind boggling.

So I hope some of these Aha moments have been helpful for you. If you'd like more help. I have a free Homeschool Help Center that I would love to invite you to be a part of. It has a variety of free resources in it that will help you be a successful and confident homeschool parent, and it's super easy to join. There's no cost. There's a link up above or down below, you know, wherever you're watching this video. You click on that link, you'll give me a little information, and then you're in, and you can take advantage of all of those resources. I'd love to offer that to you so you can be as excited about your homeschooling as I am about mine.

I'm ToriAnn Perkey and from my homeschool to your homeschool, I make these videos every week so that you can be a successful and confident homeschool mom.