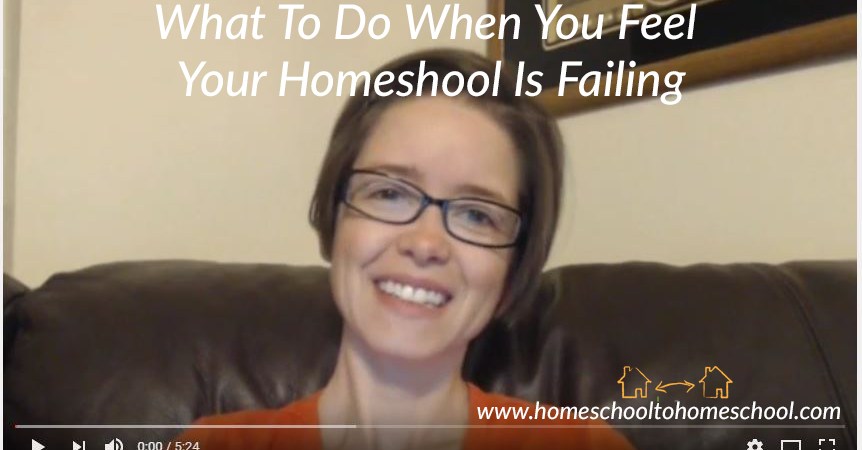 How to Manage Your Fear of Failing

Fear and doubt … the two little nemeses of homeschooling … will creep into your mind when you least expect it.

One moment you’ll be going along — planning dinner, doing laundry, prepping for the school day — and the next …

Or … you’ll hear your kids squabbling in the next room … for the FIFTH time in 20 minutes.

And in THAT moment, you’ll think “Oh no! I’m failing at this homeschooling thing!”

It happens to every homeschooler at some point.

So what do you do? It starts with what you think AFTER you’re sure your going to fail …

So what do YOU do when fear of failure shows up?

Comment below and tell me! I’d love to hear your thoughts.

I just recently had a “call to Jesus” type parent-teacher conference (with myself), where I had to really delve deep into why I was so worried about getting it all done everyday and why I feel the need to push them. I realized it comes from perception and expectations. I don’t want other people to perceive my “failure” if my kids haven’t done any schoolwork that day. I expect them to get things done, but in all honesty, my 3 kids have developed stronger and more lasting relationships because they “goof-off” or “waste time” playing instead of doing schoolwork.

The biggest thing, though, was trying to live up to an ideal, the perfection you mentioned. Whose ideal is it really, though? Who is it that I am trying to keep up with or impress? Absolutely no one!! That’s who! I don’t have to answer to anyone, but the Lord and as long as my children are making progress and still excited about learning then I have done my duty.

I also had to stop and remind myself that they are WAY ahead of where many of their peers in public school are because they have been home and learning at their own pace. I know this isn’t the case with a lot of homeschoolers, but again, progress! We shouldn’t measure our children by the standards that someone else has said “This is what your child needs to know by ____. If they don’t, they are behind!” If we measure them by how much they are progressing and how much they LOVE to learn, then that is enough. Everyone doesn’t learn the same way and we shouldn’t expect someone who isn’t emotionally, or mentally ready to perform as a master. It’s like trying to teach a toddler to fly fish – you can show them and guide them and help them, but until they have the coordination and muscle tone and develop the skill to properly throw the line, they will “fail” every time.