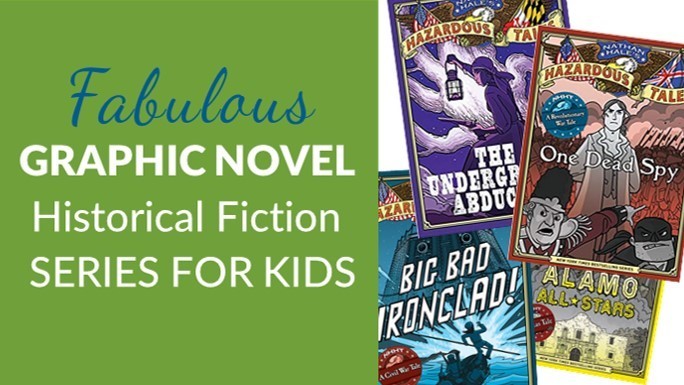 We LOVE historical fiction in our house! It’s such a fabulous way to make history come alive and for kids to really remember key historical events. Okay - full disclosure - I’ve been a skeptic of graphic novels for years. After all, can it REALLY be great content if it looks like a comic book?!?

But the world of graphic novels is no longer the fluffy “comic book” world! Graphic novels are different kind of storytelling -- using pictures instead of words to give the sense of emotion and setting.

And my dyslexic kids … my visual learners … the ones who struggle to learn through just reading get so much out of graphic novels.

Which is why I was THRILLED to find this series by Nathan Hale called Nathan Hale’s Hazardous Tales.

This series combines solid history, fabulous graphics, and great sense of humor all in one.

Each book is a treat -- and he is still coming out with new books. So far, the book series includes:

What do they look like inside? And which are our favorites? Check out the video to find out!

Rather read than watch? Keep scrolling to read a transcript of the video.

Hello, this is ToriAnn Perkey, and from my homeschool to your homeschool, I regret that I must recommend these history books. No, just kidding. I'm super excited to recommend these history books! But I had to start that way because the first one is about Nathan Hale, and Nathan Hale is the patriot at the beginning of the American revolution who before he died said, "I regret that I have but one life to give for my country."

And these books are in fact -- that I'm going to recommend -- are in fact named after him. The very first one is called Nathan Hale's Hazardous Tales. You guys, I wholeheartedly just love these books, and I'm so excited to tell you about them today.

And for kids who are dyslexic (like mine) for some reason the visual aspect of the graphic novel makes it easier for them to consume the content. So that's the first thing.

The second thing I would do is tell you about the author. His name is actually Nathan Hale, and he is named after the spy that was caught by the British who was then executed by the British. And just as a side note, I feel a personal affinity because I actually went to high school with him. And he was an amazing artist then, and he's an amazing artist now. It's just a little side note.

What I love about these books is the science ... The science ... The history is rock solid. It's so good. The first one is about the American Revolution and the story of Nathan Hale. And what happens in these books ... And the first one sets up the kind of the frame for all of these ... is Nathan Hale's about to be executed. And then he offers to teach history through a big book. And through teaching the history, they decided to stay his execution long enough that he can finish telling his story, kind of like Arabian 1001 Nights.

And so the first one is all about the Revolutionary War. There are eight more books in the series. I believe there are more to come. I'm going to tell you about the two that my kids ... it's their personal favorites, and then I'll tell you the rest.

One is called Lafayette. It's the only other graphic novel in the series that is also about the American Revolution. And this is of course about Lafayette, the French men who came and helped the Americans during the Revolution. The other one is called the Underground Abductor, and it's all about Harriet Tubman. And those two Lafayette and the Harriet Tubman are both ... my kids really do love those.

But there are also books about ... there's a book about World War I. There's a book about World War II. There's one about the Civil War, the Alamo, and there is one about the Donner party. And you guys, this one is called Donner Dinner Party. And here's what's really interesting. It actually gives a warning about a couple of pages to skip if you're extra squeamish about the Donner Party, you know, eating each other. But I didn't find it very graphic at all, which is ironic because it's a graphic novel. It was done so tastefully [!], and all of these books are done so tastefully.

My kids are learning so much history as they read these books. And let me give you an example.

This is the WWI book, Treaties, Trenches, Mud and Blood, and WWI is a really confusing topic. There's so many countries and so many different things going on, and everybody's aligning themselves with different people.

So guys, love, love, love these history books. I can't strongly recommend them enough. If they sound like they'd be something that'd be a good fit for your family, go ahead and click on the link up above, down below. You know how this works and check them out. I think you are going to love them.

I'm ToriAnn Perkey, and I make these videos every week so that you can be a successful and confident homeschool mom.