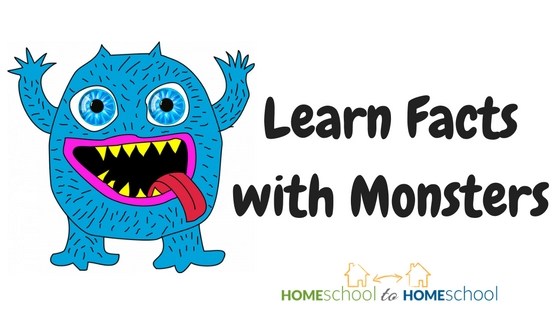 You may not know this, but over the years, my home has been overrun by monsters.

I don’t know why so many of the games I have made up over the years seem to have monsters in them, but the kids always loved them!

A great example of how we used monsters is called Alphabet Monster.

This game started when my oldest was just two years old, and I started trying to teach her to read.

(That means that Alphabet Monster is older than my decision to homeschool–wow!)

Over the years, I played it with all of my kids . . . although it went through a few variations.

It’s a great game when you’re just teaching the sounds that go with each letter. I played it with just one kid or with all four of my kids at the same time. And it’s fabulous for the kid who just can’t seem to sit still.

When it was just my two year old and me, we would chase each other around the house.

Once there were several young kids playing, the kid who picked the monster would try to catch the others before they could race around the house and back to their spot. (I would sit and watch.)

Once they got older (and more competitive and rougher!), they all just did crazy monster moves while they ran around the house one time.

When I was back to playing with one kid, I was tired so I would just tackle my youngest kid and do a monster tickle.

This game works with ANY facts that you wanted to review–as long as your monster cards were the same size as your fact cards.

Oh, the joy of monsters!

Your turn … Comment below and tell me what facts your kids would love to review with monsters!