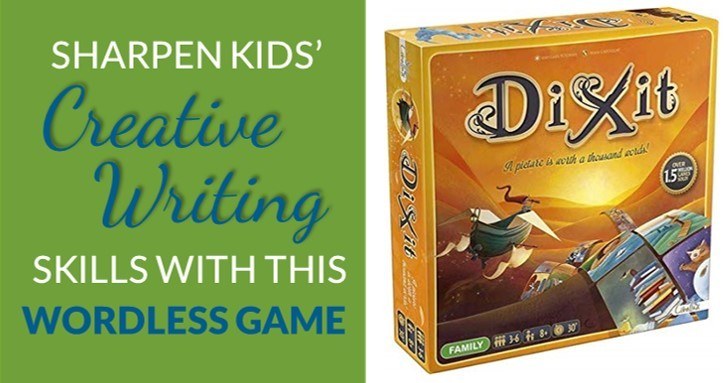 Creative writing is super important in our homeschool.

I think it helps my kids express themselves, figure out who they are, and how they want to relate to the world. It also provides an easier way to practice grammar and punctuation and all the other writing conventions that will help them communicate well as they get older.

But some kids have it easier than others.

I have two kids who took to creative writing like ducks to water … writing long stories -- first on paper and then the computer.

Dyslexia (for both) and dysgraphia (for one) made it so the creative ideas in their heads couldn’t make it to the paper easily. [I talk about all the skills you need to write in this post.]

So I went hunting for ways to help them express their creativity sooner while their reading, writing, and typing skills caught up.

I wanted them to practice their storytelling skills -- and I was looking for additional storytelling ideas to make it happen.

And THIS game is one of the answers I found.

We LOVE Dixit in our home … fun and fast to play. Works for all ages. And there’s NO reading so my youngest kid (who couldn’t read until he was 11 ½ !) could still play along with everyone else.

One caveat that I don’t mention in the video -- a few of the cards are a little creepy for a few of my kids (we have VERY sensitive souls over here) -- maybe two out of the entire deck. We just put those aside and play with the rest. It doesn’t affect game play at all.

CLICK HERE to check it DIXIT for your homeschool.

Hello, I'm ToriAnn Perkey, and from my homeschool to your homeschool, today I want to tell you about a really cool game that will help you sharpen your kid's creative writing skills ... and the game doesn't have any words.

I know pretty crazy, but stick with me.

So the game ...So first of all, before I tell you about the game, what I want to explain is why I think this game works the way it does. You see, creative writing involves a lot of things. It involves being able to write on the paper. It involves creating sentences and involves knowing, grammar, punctuation, all those things.

But no matter what age you are, the number one thing you have to be able to do to be a strong creative writer is to be able to come up with really cool stories. And this game helps support that even before kids can read and even before they can write.

And what I love about it is if your kid is a struggling reader or a struggling writer -- and we have several of those in my homeschool -- then this is a game that they can play that can be strengthening their writing skills as you're still working on some of those other pieces.

So what is the game called? Well, the game is called Dixit. And this is a game that is well loved in our family. It actually -- the word Dixit means to tell or speak in Latin -- and it's a storytelling game.

And how does it work? Well, the game comes with 84 cards. And the cards look like this. This is the back of the card and this is the front. Each one contains a storytelling scene, and they're all kind of surreal. I'm going to hold these up so you can see them. As you can see, they're kind of different.

And the idea is that you're going to come up with a story element about one of these cards. Now, that alone is a very fun way to do storytelling, and you can play with the cards just like that. But let me tell you a little bit more about how the actual game works.

You sit around -- it's up to six players (unless you play on teams) -- you sit around. You have five or six of these cards in your hand and nobody else can see them. And when it's your turn, you pick one of your cards, and you try to come up with a phrase that you think will match not just your card, but other cards that people are holding. And it can be a sound, it can be a word, it can be a short phrase. It's not a whole story, it's just a small piece.

Then everyone else ... so you say that and you put your card down. So if I have this card, for example, I might say "message." Simple, right? If you look really closely -- let's see if I can get that to focus -- this guy is holding an envelope with a message.

All right, so now I have said "message." I put my card down. Everyone else in the circle goes through their cards and tries to find a card that will match. Maybe it does, maybe it doesn't. Kinda like Apple to Apple ... Apples to Apples, if you've ever played that game.

The goal is the storyteller is to pick a word or a phrase or a sound that is not too obvious, but not too obscure. You want to hit right in the middle. And it's a really clever way to really think about what are the other cards probably going to do. What does your card do? And it pushes the brain in problem-solving with language in a way that I've never done with any other game. And when you're done, you keep score and then you move on. It takes about 30 minutes to play depending on how many people you have.

So that is a game that I strongly recommend you consider for your homeschool. So much fun to play. All ages can play together. You don't have to read. And it really, really, really pushes the brain to think about words and language and sound in a different kind of way that actually helps with their creative-writing skills as well.

So if this is a game that sounds interesting to you, you can check it out at the link up, above or down below. You know how this works. It's wherever you are watching this video. I'm ToriAnn Perkey, and from homeschool to homeschool, I make these videos every week so that you can be a successful and confident homeschool mom.