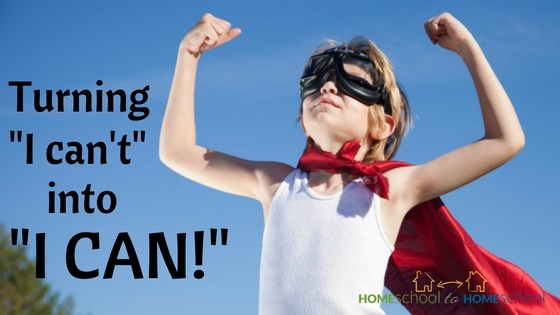 I once asked my six year old to pick up some food that had fallen on the floor during dinner time.

I knew she would be squeamish—it was peas and mashed potatoes, after all—so I offered her a paper towel to protect her fingers from slimy cold food and lots of encouraging words. She still collapsed in a heap on the floor, and as tears began to stream down her face, she sobbed, “I can’t! I can’t!”

“Really?” I wanted to say. “You can’t bend down and pick up a few pieces of food off the floor? What, are your arms broken?”

Fortunately, my “time to be a good parent” sensor went off. (It happens sometimes!)

I remained calm and let her spend the next forty-five minutes working through her issues with wet food.

So why do kids say “I can’t” when you know that they can?

You know they can because you saw them do it yesterday … or they did something much harder last week … or you saw their sibling who is six years younger do it earlier that same day.

I believe sometimes my kids know that they can, too, and they say “I can’t” just to avoid doing something unpleasant.

Competence is one of the basic human needs. It means that you feel like you can accomplish something, or that you can be successful at what you attempt.

But competence is much more than just what you are capable of physically. In order to feel motivated to do something, you also have to feel emotionally competent. I have one son who struggles to complete simple tasks–such as brushing his teeth–if he is tired or hungry or receiving too many instructions at once.

He will start to cry, get angry, and yell that “he can’t do it.”

Now I know that he can physically brush his teeth. He does it all the time.

But in the moment, emotional or mental or unrelated physical issues cloud his ability and remove his competence.

One of my daughters has spent years learning to play the violin. Again and again, when she hit something new and difficult, her initial reaction was to throw herself into her chair and proclaim, “I can’t do it!”

This usually happened after she had tried and failed to be perfect the first time.

It took years to learn for both of us to learn that “I can’t” almost always meant she was one or two tries away from getting it right. But in the moment, she really did feel like it was hopeless.

She didn’t feel competent and didn’t want to keep going—even if she was only moments away from success.

Every Kid Is Different

Some kids come to this Earth naturally feeling more competent than others. They trust themselves and are willing to give new things a try. They aren’t easily overwhelmed. They problem solve new situations, seeing them as an exciting challenge.

Other kids struggle breaking tasks down into manageable steps—they get easily overwhelmed. They look at something new with a lot of fear and trepidation. They don’t like to take risks—and they don’t want to fail.

These kids require a lot of additional patience and love.

They need us, as parents, to help them feel like they can be competent. We have to provide a safe environment for them to practice failing so that they can succeed.

We have to help them break down tasks and walk them through those tasks step by step. We have to be calm and collected as they work through intense emotions that come with not feeling capable and competent at a job that they have to do.

Step Back and Ask

Do you have someone who says “I can’t” a lot? Do you want to throw your hands in the air and yell, “Yes, you can!”?

Next time you have one of those moments, step back and try to figure out why they don’t feel competent.

Is there something more going on? Could you sympathize more? Break down the steps? Encourage them to not be afraid to make mistakes?

Rarely, are there easy answers. But how you respond will either take them closer to feeling more competent or drive them farther away.

As you find the root causes of the “I can’t” and address them, you’ll start to hear more “I CAN!”

And that’s a beautiful sound to hear.

Do you have a kid who says “I can’t” all the time? Share your story below and what you’ve found helps.